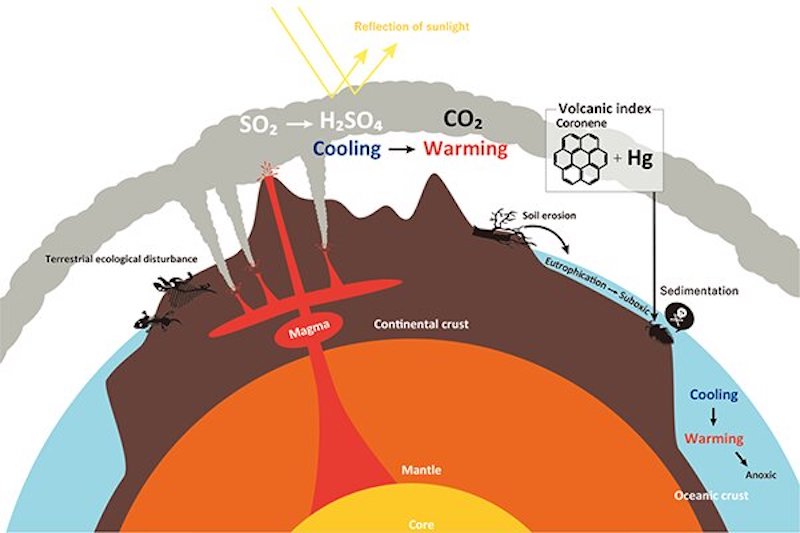 The researchers found coronene-mercury enrichments in sedimentary rocks deposited in southern China and Italy 252 million years ago. Paired coronene - mercury enrichments are products of multiple phases of a large igneous province volcanism. This, they say, could have led to the environmental changes that caused the disappearance of many terrestrial and marine animal species. Credit: Kunio Kaiho

Nov. 10, 2020 (Phys.org) -- Researchers in Japan, the United States and China say they have found more concrete evidence of the volcanic cause of the largest mass extinction of life.

Their research looked at two discrete eruption events: one that was previously unknown to researchers, and the other that resulted in large swaths of terrestrial and marine life going extinct.

There have been five mass extinctions since the divergent evolution of early animals 450-600 million years ago. The third was the largest one and is thought to have been triggered by the eruption of the Siberian Traps -- a large region of volcanic rock known as a large igneous province. But the correlation between the eruption and mass extinction has not yet been clarified.

Sedimentary mercury enrichments, proxies for massive volcanic events, have been detected in dozens of sedimentary rocks from the end of the Permian. These rocks have been found deposited inland, in shallow seas and central oceans, but uncertainty remains as to their interpretation. Mercury can be sourced from either direct atmospheric deposition from volcanic emissions and riverine inputs from terrestrial organic matter oxidation when land/plant devastation -- referred to as terrestrial ecological disturbance -- occurs.

The largest mass extinction occurred at the end of the Permian -- roughly 252 million years ago. This mass extinction was marked by the transition from the divergence of the Paleozoic reptiles and marine animals like brachiopods and trilobites to Mesozoic dinosaurs and marine animals such as mollusks. Approximately 90 percent of species disappeared at the end of the Permian.